What a nice guy!

Okay, I had quite the week this week. First off we visited a less active member and we asked, basically, "Are going to Church this week?" and she said "No, my heart isn't there." To make a long story short she claimed that it was God telling her not to go, then my companion went to 2 Nephi 32:8 and told her those feelings were of the Devil, then he asked her if she was going to Church and she said... no. So then Elder I bewilderedly asked her if she wanted to follow the Devil. It was... interesting. I also fell in a hole in the sidewalk at night and scraped up my arm a bit. That hurt but no infections, so that is good. Lots and lots of ratez-vous this week, seems like everyone is busy. We did get to teach Fr B P, a recent convert who we haven't seen in months, that was cool. Sr C is still coming to Church, though we didn't teach her this week because she found work at a hotel (doesn't work Sundays though!). Even so, now she has money for transport and her family. I went on splits with Elder T this week, and the first lesson was English (even though I had spoken French when I called the investigator) and Elder T didn't understand a word of it, so that was a bit awkward. The investigator's name is S and he had some very relevant questions about prayer, baptism, sin and such. I responded to the ones about prayer and sin and when he asked about baptism I said, "Next time" because we were already late for our next appointment, who wasn't there. Fun times. I've had lots of good study's lately though, so at least that is going well. The examples of the people continue to inspire me, like Alma the Younger. He takes the judgement seat but when he sees his people in iniquity he leaves everything to go preach. A great example of faith. Oh, I don't remember if I mentioned but Elder Christofferson will be coming to Yaounde in November, I'm pretty excited. And we lost our telephone and had to buy a new one (fortunately not that expensive) and do stuff with SIM cards and whatnot to have the same number.

Give my congratulations to Bailie! I hope she will be happy also.

As for the cat, I had no idea it was cat when I ate it. It was afterward when someone mentioned that it was good cat that I found out. We Elders are doing fine. I did buy stuff to make no-bakes this week, though I'm going to try replacing chocolate powder and peanut butter with something like nutella (because choco powder and PB are EXPENSIVE, around 4000 Francs each, so I would be using 2/7 of my soutien for those)
"Maman" basically just means mama, though it is usually used with older ladys. Like in Tahiti, the older men and women are often called "Papie" and "Mamie" respectively. 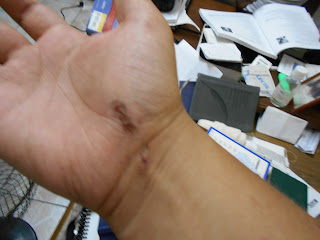