I'm doing very well! I do try to make sure I'm eating vegetables every meal, though I wish they knew how to really make grilled vegetables. Still, the wraps are good and so are the salads. I also got to meet one of the new Area Seventies since he is over our mission. Elder Christensen got a call and they told us he was visiting us in class in a few minutes. We hurriedly cleaned up and did a short activity. His name is Elder Christophe Kawaya and he was so cool. He spoke very little English so he mostly spoke to us in French, though his accent was a little hard to understand since he is from Africa (I believe DRC). Before he was called to be a Seventy he was a primary teacher or something similar and that was the only calling he had had... had.

I loved conference** too. I think this might have been the only one where I was awake all the time during all sessions. Obviously I loved Elder Holland's talk. I started this thing that when a teacher, Priesthood leader or the like says that they love us we say, "Mon Cœur!" and put our hands over our hearts so that was how we described his talk when discussing conference. I also loved the talk about rescuing. I also agree with the identification first and foremost as a child of God.

I totally forgot to tell you that we were visited by the Ambassador to the US from the European Union last week. It was cool but it was only for ten minutes, he seemed nice though. Oh, and tell Stacey I love her and to keep working hard at the violin! Thank you so much for all the support!

J'taime
I fear NO MAN! 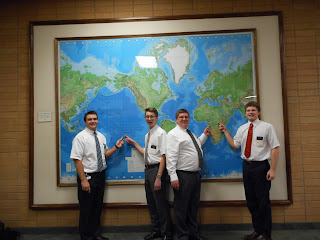 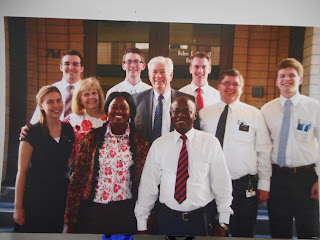 A picture of our picture with Elder Christophe Kawaya and his wife (mid front), one of the temple presidency people and his wife (mid mid), and one of our teachers, Frère Vanderholm (right behind me). Also the picture is balanced on whiteboard markers.
Posted by klrussell at 11:52 AM No comments:

Good people going out to serve


Happy belated birthday! I see I'm still forgetting it. I hope you all had a great trip! Tell (everyone) I'm having a great time in the MTC and that I'm excited to go to the Republic of the Congo (also Cameroon and Gabon).

Right then, Elder ZoBell is also going to the Republic of the Congo, Brazzaville mission. Also the entire zone except our district and another left this week. It was sad but exciting and I'm so glad there are so many good people going out to serve. That left only seven people in the Zone until Wednesday where we received eleven new missionaries: eight new Elders and three new Sœurs. I haven't got to know many of them yet but they seem like excellent people.

During the Tuesday devotional I had a tender mercy. I was super tired and thought I would fall asleep during it. They announced who the speaker was (Elder Vinson) and he was someone that Sœur Mitchell knew from Sydney because her seminary teacher had been good friends with him and his wife. He is also the 70 over the West Africa area, which is right next the area I'm serving (Africa Southeast). I most definitely did not fall asleep. I also got to meet him briefly because they wanted to take a picture with Sœur Mitchell and she was the only Sœur in our zone at the time.

I did initiatories* this morning and it was cool to hear that again since I had only done it once. It was also amazing to think about what it meant to those I was doing them for.


I have been using the "I fear no man!" more also, though I still haven't translated it to French. Speaking of which, the coolest thing I learned in French this week was using the conditional, even though I did that on my own time instead of in class. We also practiced asking questions to find the needs of our investigators, which was really cool. 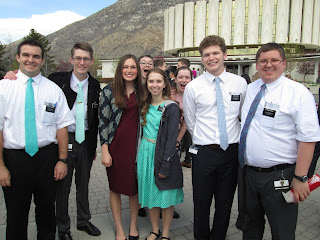 Posted by klrussell at 7:59 AM No comments: