Friday March 25 2016
I am doing awesome this week! The language is going great! The lessons are going great also. I try to remember in every prayer to ask for charity for my companion, my district, my zone, those I am/will be serving... and everyone.

I'm doing well with French and my teachers are quite funny. Yesterday one showed us "Santa Claus" in the scriptures (Zech 1:7-10, 2:6) which was hilarious. My companion and I did well in our lessons; Though often we don't invite the investigator to do everything we want to invite them to do we have always invited them to pray.

One cool new thing I learned in French was using the conditional. We didn't go over it in class but I started making flash cards for grammar and words. We also memorized James 1:5 in French. Part of that was translating the meaning into English and that helped a lot. We also went over a review system and decided to recite memorized scriptures (and invitations and the missionary purpose) at the start of companionship study. Elder ZoBell is progressing in the language quickly. He came here knowing no French except "Bonjour" and now he is saying a lot during lessons. He still struggles with conjugations but I know he will be able to learn the language trés vite.

My toes are doing very well. I can run unhindered by them now so that is nice... plus I can play volleyball without worrying about them too much. I'm not really sick anymore but I have this very persistent cough. I'm not entirely sure but I think it has to do with how dry it is here. I've been drinking lots of water too. The cough is particularly annoying because it often come up when I'm singing, and as you know, I love singing. Nevertheless I am still doing very well.

We got to see the Provo City Center Temple dedicated on Sunday and that was... so awesome. It was beautiful and the spirit was so strong... words cannot describe. I do remember Elder Oaks inviting two kids to put on some ceremonial mortar on and that was very cute.

Don't worry about the sports. If I had wanted to learn more I had plenty of opportunity to do so. I'm very content knowing about Lord of the Rings, Tolkien and all that stuff.

And now I guess it is time for pictures since I'm running out of things to say! 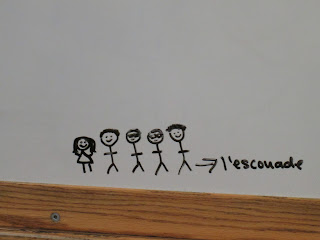 ​"L'escouade" or "The Squad" or "The District". L'escouade actually is a police squad but ce n'est pas grave. 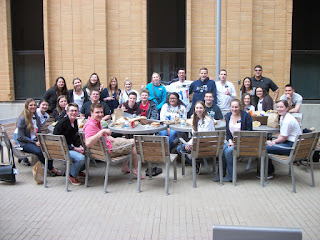 Here is a picture of the whole zone!

Je t'aime and I FEAR NO MAN!
Elder Russell
Posted by klrussell at 2:57 AM 1 comment:

Friday March 18 2016
Mon Francais deveni tres bon! The coolest new word I have learned is reconnaissant which means, "thankful, grateful." I have also learned a few Tahitian words because Elder Crandell, Elder Christensen and Sœur Mitchell are going to Tahiti. I've learned ia maramarama (ya maramarama) which is "to know" in Tahitian. Everyone else in my district knows more about sports than me. Oh, Elder Crandell and Elder ZoBell are both from Utah, Elder Christensen is from California and Sœur Mitchell is from Australia. I'm 99% sure that I'm here for six weeks (that is, five more weeks)

I've been learning a lot about the atonement and restoration because that is what we have taught our investigator, Johnatton. He doesn't have a gold tag so he isn't an actual investigator, he is just playing the role. We just taught him about repentance and baptism and we will be teaching him about the sacrament next. It was funny because when I asked him if he wanted to be baptized he said yes. So I asked, "When?" and he said that he wanted to be baptized on his birthday. I asked when that was and he told us it was in October. I was going to say, "How about next week?" but I felt prompted to ask him to pray about it and he said he would.


Elder Russell
Posted by klrussell at 11:07 AM 3 comments:

Friday March 18 2016
Hi Stacey! My companion is pretty funny I guess. Sometimes he has a hard time waking up but we're all pretty good at waking up on time. I am having fun learning Francais parce que j'aime apprendre les langues (I love learning languages).


Elder Russell
Posted by klrussell at 11:06 AM No comments:

Friday March 11 2016
I went to the temple this morning and it was awesome. It has been fun talking in French during class and learning new words in the language. I have a very fun district, but also a pretty small one. There are (is? Are is? Is are?) just five of us: Elder Zobell, my companion; Elder Crandel, our district leader; Elder Christansen; Sister Mitchell; and me. I think my companion and I are going to get along just fine. We are going to teach our first MTC investigator today. I'm a bit nervous, mostly because there are a bunch of words I wish I knew how to say in French. Tell everyone thanks for all the support and that I love them! I'm excited to get out into the mission field and I hope you are having a wonderful time!
(Guess you didn't get a "book" this time!)

Also, I FEAR NO MAN! 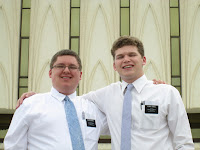 Posted by klrussell at 11:35 AM No comments: 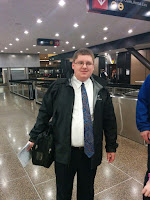 Wednesday March 9 2016
I'm having a great day at the MTC! I love you so much and will be excited to see you again! P-day is Friday and I'll e-mail you back soon!
Posted by klrussell at 11:21 AM No comments: