We had a long week this week with all the things we had to do. Being a zone leader, or the companion of one, without a couple is a lot of work. We had to make sure bills were payed, that all the money was in the right place, clean the Call's apartement for their arrival the 11th... wow.
I also did splits with Elder R, the second time I've worked with him since my second day here. It was pretty cool. There was this beautiful view from a hill, sadly I totally forgot my camera. Also, most of our current investigators are progressing rather slowly. And Halloween isn't a thing here. Anyways. Sr J, such an awesome lady, is just waiting to inform her family to get baptised. Her mom has heart problems so she doesn't want to scare her out of her wits and cause an accident that way. The other investigators understand the docterine, they just have problems with application of it in their lives, actually some do have problems with the docterine, but not many. Sr P has lots of questions, which is good, but by her question we think she isn't reading the Book of Mormon, as in REALLY reading it. Same with Sr S, who also is very worried about how others view her. Sadly I don't have a lot of information this week.

The new Elders in Bonaberi are cool, Elder C (from Guadeloupe) and Elder D (from somewhere in the US, I think Arizona because he mentions it a lot but I realized I haven't actually asked him) They're people I would have definitely hung out with if we had lived in the same area. Big ol' nerds. Apparently Elder C talks about Pokémon a lot with Elder O. So yeah, that's cool.

I'm glad you had a great time at the Chili cook of and trunk or treat! I noticed I am starting to get a bit complacent, especially in terms of study French. Unacceptable! I shall renew my efforts like never before! Even though I said that in a joking sounding voice in my head I'm serious. Getting complacent is the first step to getting lazy, and being lazy isn't good.

So yeah, that was my week. Language facts: I jolo giza (Ee jolo giza) is Kurundi for goodnight. 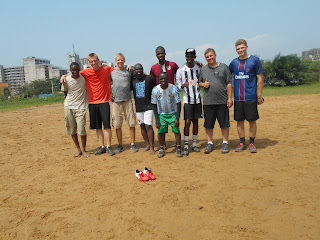 ​Just all the missionaries playing soccer, this time in the city proper