This was a pretty slow week for us, but still good. Sr C bore her testimony on Sunday. We had some crazy stuff happen again with the zone leaders and transfers. Speaking of transfers; I'm still here in Douala C. Elder K, Elder B and Elder R are all going to Yaoundé. We are also getting a Tahitian Elder, whose name escapes me. We visited Sr S and I asked if she had really been reading the scriptures. She said that one time she felt prompted to and she found the answer to her question that time. We emphasized the importance of studying the scriptures, even if just for fifteen minutes. She said she would do better and I really hope that will help her to gain a firm testimony. Hopefully this month we will be able to move into a new building. That will make it a lot easier for contacts to come to Church and see how everything goes; that will also help quite a few less-actives.

As for conference, we haven't seen it yet. We will see it this week though, so that is good. I sent a picture of Sr C's baptism last week, but apparently the member taking the picture wasn't too aware of how to use my camera so there are no photo's of me there. And last week I actually said that we were at cyber at the least effective hour to write emails and such. That hour is around 6h because everyone is either in cars, on motos or in a huge rush to get home. Not fun to be going to or from Bonaberi around that time. Elder K bought a cookbook with a bunch of Camerounaise recipes. So that is cool. Tell Aaron hi for me! I'll be sad to miss the chili cook off but I'm on a mission so: ça va! Don't forget to send me pictures of your costumes for Halloween! Also I found a simply way to make a wizard like costume with some stuff I have so I will send a picture of that... next week because I totally forgot to take pictures this week. 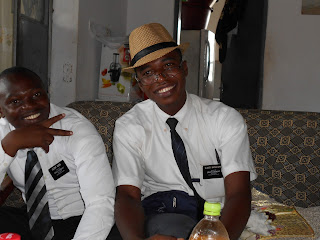 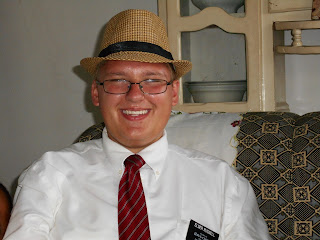 Posted by klrussell at 9:28 AM