...as is fitting for a medical advisor and his wife

Today was a pretty cool week because we had a zone conference with President and Sister Monga. The area medical advisor was also there with his wife and they gave us lots of medical advice... as is fitting for a medical advisor and his wife. He was actually born in South Africa and raised in Canada. We got to eat at a Chinese restaurant called "Restaurant Chinois" which literally means, "Chinese restaurant". They had really good food, including fish and shrimp. Delicious. We fixed Sr K’s baptism for the 24th of this month and Sr S said she would like to get baptized the 24th of December, because Elder and Sister Call should be back then, though I honestly hope the Holy Ghost touches her heart to do it sooner. Fr G is doing well, though it is difficult at times to teach at his house because he has a very chatty father. Also his father is either polygamist or got married three times, not sure which. Oh, and he still can't come to Church because work prevents him, though you can tell that really upsets him. He said during one of the leçons that that "ennerve"s him. At least I think that is how you spell it, I haven't looked up the word yet. The main topic of the Zone Conference was about the Holy Ghost. That was a really good leçon and I think it helped everyone. I've also noticed that I talk to people more easily, I'm not as awkward any more. So that is good. We are going to give the Book of Mormon to Fr M next Sunday. He's a new investigator, and he read all of the brochure, so it was really easy to teach the restoration. Fun times! Also one night I was out on our balcony and I thought, "This is really pretty" so that's good that I'm starting to like the area more! The Church is also trying to acquire a new building closer to the members, which is towards Bonapriso in our sector and about 30 minutes to an hour away from the apartement. They actually got a temporary permit so that someone else couldn't come along and take the building while the Church did everything necessary to acquire the building. The Calls still said "Get people to come to Church in the building we have now!" during the Branch Counsel. Pray that we get this building. Pray for Sr K and Sr S to stay strong in their testimonies and their decision. Pray that Fr G can find new work that will let him go to Church or that he can negotiate with his employer to change his hours to allow that. Oh, and also to legalize his marriage. We will also teach him more about marriage next week. Pray for Sr J too, so that she can stay strong until she can take the lessons again and get baptized.

Thanks for all the support and encouragement you give me. I can't believe Rachael and Stacey are already back in school! Time really is flying. Now I just got to take hold of it while I can. 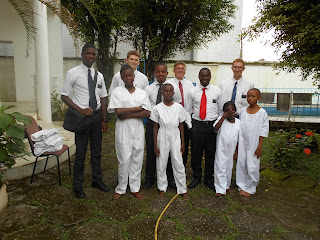 So apparently computers hate me and don't want me to send you the most recent pictures I've taken. So here is that baptism I talked about for ever ago!

Posted by klrussell at 3:15 PM