Felicitations (congratulations) to a certain pair of people!

Our week interesting because we had two days where we thought we would have interviews with the president and then we didn't have them. On Thursday I did a split with Elder ZoBell so that he could interview Fr Arsene. It went well.

We had zone conference and it was really emotional because it was the last one President Monga will do in Yaounde. We had a combined sacrament meeting with the branches of Biyem-Assi, Mimboman and Anguissa (so all of the missionaries in our district were there) It was hot because we were in a small room with a metal roof, fortunately the fans were working. The old district presidency was released and the old First Councilor (I think) became the President. The Second Councilor is still Second Councilor and someone I don't know is First Councilor.

That was also an emotional meeting because President Monga was there and gave a talk. One of the things I learned from President Monga's talks was that we are always developing throughout our lives and we must develop our capacity to feel the Holy Ghost or else it is going to be really hard for us to progress in our lives. I also read some of the Teachings of Joseph Smith and he had talked about how our thoughts must reach to the highest heaven(s?) and sound the deepest abyss. I thought that was really cool

Still haven't gotten a hold of Fr Cyrille... I think we'll have to just pass by.  We talked with Fr Obert and his wife this week and we should be able to pass by more often to see them now because we know where their house is.

I've had some fun talking to Elder Constant from Guadeloupe because he likes a lot of the same stuff I do. He's cool. All in all it was a good week. 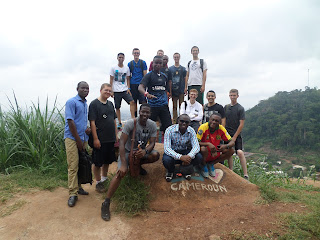 Posted by klrussell at 8:37 PM