We ate sandshrew this week... some explanation: we ate pangolin. It looks like the pokémon sandshrew so... yeah. It wasn't the greatest thing I've eaten, very tough skin and it tasted too much like liver for my taste. I don't like liver. Anyways, we got Fr Rodrigue (the investigator who has visions... literally) a Book of Mormon! We also invited him to get baptized; he accepted. So, really excited for him. Fr Frederic is going well, but he still has his foot problems, which means he can't get to church, plus some eye problems which make it difficult to read. So... yeah. Fr Essomba seems to have disappeared, but we did see his wife. I think he has lots of struggles financially right now. We had lots of amis at the Church, many were younger children. I hope the Church will influence them for good (and that we can meet their parents sometime soon.) Transfers are next week. We did two splits and I worked with Elder Best and Elder Wright. It was cool. We also got couches for the apartement, which is nice. I looked through my journal (which I still need to write in more) and it was fun to see the changes since I came on my mission.

But yeah, I might need to get new clothes soon. I didn't think I'd change so much on the mission... 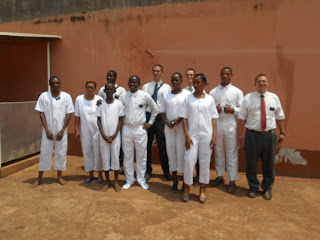 Posted by klrussell at 5:40 PM